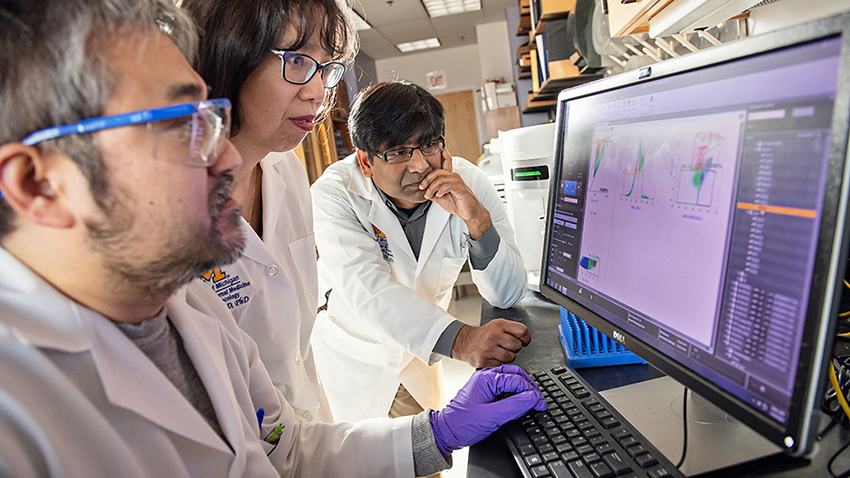 In a surprising finding, researchers from the University of Michigan Rogel Cancer Center have shown that knocking out NLRP6, a protein that plays a protective role in other diseases, led to better outcomes and less-severe symptoms after bone marrow transplants in mice.

A protein that protects people with inflammatory bowel disease has quite a different effect in graft-vs.-host disease, a common and challenging side effect of bone marrow transplants.

In a surprising finding, researchers at the University of Michigan Rogel Cancer Center showed the protein NLRP6 aggravated the difficult symptoms of gastrointestinal graft-vs.-host disease (GVHD). Knocking out this protein in mice led to significantly better survival and less severe GVHD.

GVHD, a response to the donor bone marrow, causes symptoms similar to ulcerative colitis, including diarrhea and abdominal pain. Generally, the mechanisms that cause colitis overlap with those that cause GVHD, and many of the treatments are similar.

Studies have shown NLRP6 lessens symptoms in colitis. So when researchers looked at NLRP6’s impact on GVHD, they assumed it would also be protective.

“There are a lot of reasons NLRP6 seemed to work well in those other diseases, but in the case of GVHD, it seemed to do the opposite. In mice where we knocked out NLRP6, instead of doing worse, they did better. That was a big surprise,” says co-senior study author, Pavan Reddy, M.D., deputy director of the Rogel Cancer Center and division chief of hematology/oncology at Michigan Medicine.

In their study, published in Nature Microbiology, the team compared mouse models expressing NLRP6 and those in which the protein was eliminated. In both models, the mice had undergone a bone marrow transplant.

The second surprise was that NLRP6 played a role that was not dependent on microbiome composition. Previous data had suggested NLRP6’s protective role is directly related to the microbes within the intestinal tract: the more good microbes, the more protective effect.

In this study, researchers measured the levels of various microbes, then worked to alter the microbiome, wiping out certain microbes or breeding mice together to share their microbiome. They developed mice in a germ-free environment and then exposed them to a microbiome with and without NLRP6. Each time, those without NLRP6 had better outcomes.

“Even when we did all of those manipulations, the protection was still there in the NLRP6-knockout mice. The composition of the microbiome does not seem to matter, unlike with other disease processes,” says study author Hideaki Fujiwara, M.D., Ph.D., a post-doctoral researcher in Reddy’s lab.

Digging deeper, researchers found a metabolite called taurine that appears to be, in part, responsible for turning on NLRP6 and ultimately making GVHD worse. Changes in the microbiome can lead to excess taurine, which signals NLRP6, which in turn triggers GVHD.

“Just measuring changes in the microbiome is not always sufficient. We have to look at what specifically changes and the consequences of those changes. A change that leads to the generation of metabolites like taurine or other proteins or enzymes will need to be understood to comprehend the effects of the microbiome on GVHD,” says co-senior author Grace Chen, M.D., Ph.D., associate professor of hematology/oncology at Michigan Medicine.

“Conceptually, if we can target this protein and block NLRP6, we can mitigate intestinal GVHD. Or, if you look at it the other way, changing the diet or microbiome to avoid an excessive amount of taurine could be another way to reduce GVHD,” Reddy says.

NLRP6 is expressed in gut cells but not in the tumor cells the researchers studied. This means the bone marrow transplant could do its job to eliminate the tumor. In principle, blocking NLRP6 could limit GVHD without limiting the transplant’s anti-tumor effect.

Reddy notes that no blocker currently exists against NLRP6 and any potential clinical benefit still needs to be explored. His lab plans to follow up with more study of taurine and other metabolites, including how modifying them impacts NLRP6 and GVHD.

This story was originally published by the Michigan Health Lab Blog on March 22, 2019.