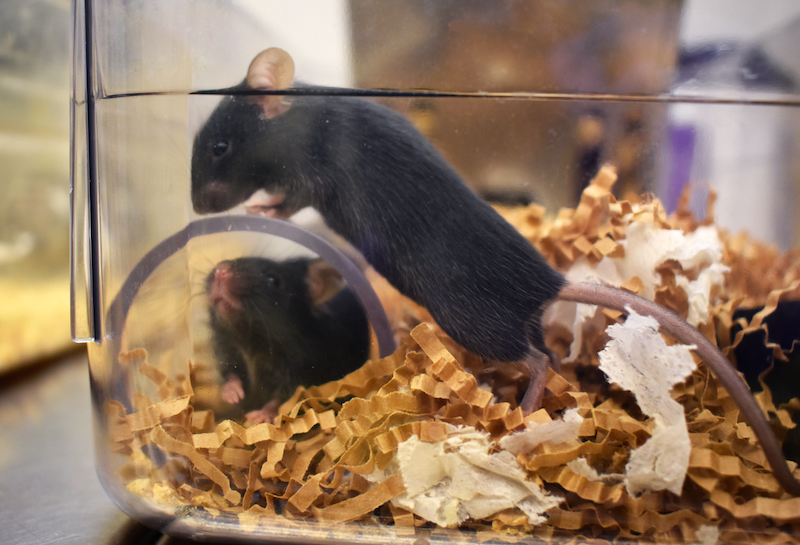 The early successes of engineered polymeric materials known as hydrogels in animal models represent a new way to heal intestinal damage — a process that one day might be applied to other injured organs.

Combining engineered polymeric materials with clusters of human stem cells marks an important step toward developing a new technology to help treat injuries caused by gastrointestinal diseases such as Crohn’s and ulcerative colitis. Researchers from the University of Michigan and the Georgia Institute of Technology reported on the findings in the journal Nature Cell Biology. The engineered materials, known as hydrogels, may eliminate a present (and problematic) method for growing the stem cell clusters known as organoids: a biological matrix derived from cancerous mice.

“Before, we were only able to grow mini-intestines in a matrix derived from a mouse tumor cell line,” says Miguel Quiros Quesada, Ph.D.,
a U-M postdoctoral research fellow and co-lead author of the study. That approach, he adds, “limits the potential of translation from mouse to human.”

The reason? Composition of this matrix is variable and indeterminate — and the proteins that are part of it may have immunogenic, pathogenic and even metastatic side effects if used in humans. The new synthetic hydrogels, researchers note, also face technical challenges. But early successes in animal models could point the way to a new type of therapy that might have applications for repairing damage in other organs — including the kidneys, lungs, liver and pancreas.

The work, which took place in the Parkos and Nusrat Labs at the U-M Department of Pathology, is supported by the National Institutes of Health, the Crohn’s and Colitis Foundation, and the Regenerative Engineering and Medicine Center between Emory University, Georgia Tech and the University of Georgia. And it may be the first to show that organoids derived from human pluripotent stem cells can engraft into the intestinal tissue of an animal to accelerate wound healing.

In the research, the hydrogel was used to form a matrix that provides a temporary structure for the HIOs. It also provides signals that cause the cell clusters to differentiate and grow. Earlier approaches used an extracellular matrix derived from a tumor cell line, which would have been problematic for future uses, notes Asma Nusrat, M.D., director of experimental pathology at the U-M Medical School.

“The fully defined nature of these synthetic bioengineered hydrogels could make them ideal for use in human patients in the event that HIOs are used for therapy in the future,” Nusrat says. “In this work, we demonstrated that the hydrogels facilitate the transplantation of HIOs into an injured intestine, suggesting that this technique has significant implications for treating intestinal injuries caused by diseases such as inflammatory bowel disease.”

The synthetic matrix, developed at Georgia Tech, contains an adhesive peptide and is engineered to allow the growing cells to cut through the polymer crosslinks. It can be made consistently from batch to batch, independent of any cell line, with components that can be well defined and characterized.

Using a tiny colonoscope in a U-M lab, the researchers delivered hydrogels containing the organoids into wounds that had been made in the intestines of immune-compromised animals. The implanted cells were labeled so they could be detected later. Results came quickly: After four weeks, the HIOs had completely engrafted into the injured area, forming three-dimensional structures. The synthetic hydrogel had disappeared, replaced by natural extracellular matrix produced by the cells themselves.

“HIOs provide a powerful platform that recapitulates important features of the intestine — making them suitable to study normal and diseased tissue — and they are a potential tool for human therapy,” says Jason Spence, Ph.D., associate professor of internal medicine at the U-M Medical School. “These studies are proof of concept that HIOs embedded in the synthetic matrix might be used therapeutically to enhance mucosal wound repair in gastrointestinal diseases.”

The synthetic hydrogel used in the research is based on a four-armed, maleimide-terminated polyethylene glycol macromer that supports robust and highly reproducible in vitro growth and expansion of the HIOs. Properties of the hydrogel structure can be modified to suit the needs of the cells being hosted. For instance, Georgia Tech graduate research assistant Ricardo Cruz-Acuña experimented with several combinations before determining that a hydrogel made up of 96 percent water was ideal for the HIOs.

“Because our hydrogel system is modular, we can just plug in the peptide that is needed and alter other parameters to create the mechanical properties desired,” says García. “The specifics may be different for other cells intended for different applications.”

As next steps, the researchers want to test their hydrogel matrix in animals with normal immune systems and in disease models. They may also need to optimize the method for delivering the hydrogel material containing the HIOs to replace the labor-intensive techniques used in the research. Experiments in large animals would probably be needed before human trials could be considered, García adds.

Beyond the intestinal applications, researchers are also studying the use of hydrogels to deliver organoids to damaged kidneys and lungs.

“If this is applicable to other organoids, there could be many other applications,” García says. “There could be a lot of exciting research ahead of us.”

This story was originally published by the Michigan Health Lab Blog on November 13, 2017.