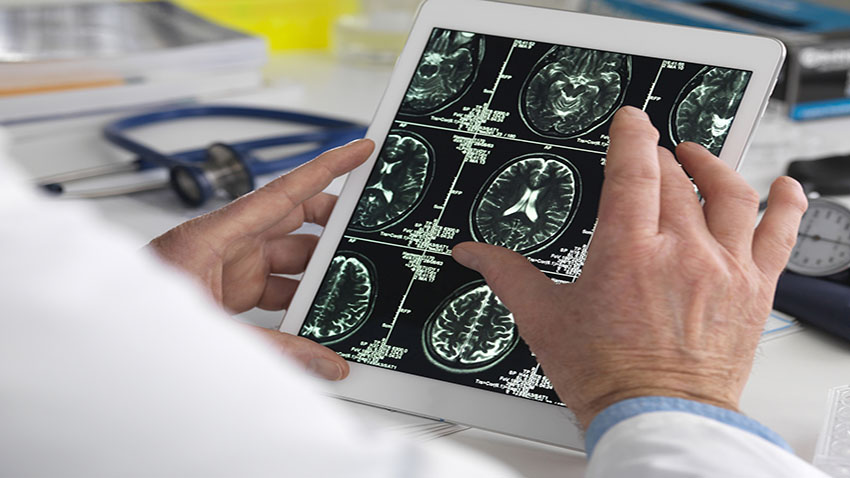 Using a new approach that combines data from human tumors grown in mice with data from The Cancer Genome Atlas, a team led by University of Michigan Rogel Cancer Center researchers has uncovered several previously unknown biomarkers for glioblastoma, the most common malignant brain tumor.

Large randomized clinical trials can uncover biomarkers that indicate which cancer treatments are likely to work best for individual patients. But it’s been challenging to find these biomarkers in rarer cancers where such robust data aren’t available.

Using a new approach that combines data from human tumors grown in mice with data from The Cancer Genome Atlas, a team led by University of Michigan Rogel Cancer Center researchers has uncovered several previously unknown biomarkers for glioblastoma, the most common malignant brain tumor.

About 11,500 patients are diagnosed with glioblastoma each year, according to figures from the Central Brain Tumor Registry of the United States.

The genetic signatures the researchers identified could help doctors determine which patients with glioblastoma are likely to respond well to chemotherapy, radiation therapy, or a combination of both — and which patients are unlikely to benefit from standard care and thus may be good candidates for trials of novel drugs.

The approach could be applied to other uncommon cancers where data from randomized trials aren’t available, says Daniel Wahl, M.D., Ph.D., a radiation oncologist and researcher at U-M and senior author of a study recently published in Neuro-Oncology.

Wahl’s lab teamed up with Jann Sarkaria, M.D., a radiation oncologist at the Mayo Clinic whose lab has long worked with mouse models of glioblastoma using patient-derived tumors. These have primarily been used to understand whether new drugs might work for glioblastoma, but Sarkaria’s group had also determined how well these models responded to standard treatments — namely the chemotherapy drug temozolomide, radiation therapy, or both.

Wahl asked Sarkaria if he had looked at his data to better understand what factors predicted positive and negative responses to those standard treatments.

“He said no one had ever done that,” Wahl says. “His group generously shared reams of treatment data that our first author, George Zhao, M.D., analyzed and annotated. We looked at data from nearly 300 experiments in about 30 mouse models to figure out which gene transcripts predicted benefit for each type of treatment.”

Wahl likens the work to twin studies that would be impossible to do in humans: growing sets of identical brain tumors in genetically identical mice, then leaving some untreated while treating some with chemo, some with radiation, and some with both. And repeating the process using 30 different tumors from different patients, then examining gene activity across the tumors to understand what was driving positive and negative outcomes.

Of course, what’s true in mouse models is not necessarily true in human patients.

So the researchers validated their findings using data from The Cancer Genome Atlas, a public database jointly developed by the National Cancer Institute and the National Human Genome Research Institute. That dataset included gene expression, treatment, and clinical outcomes data for just over 500 glioblastoma patients.

“It’s not perfect, but it’s a huge dataset — and again, large randomized trials with correlative molecular data for GBM don’t exist,” Wahl says. “And in the end, what we found to be true in the mice was also true in the patients. So this method allowed us to generate candidate predictive biomarkers without conducting a randomized trial.”

Wahl is hopeful that, after further validation, the new biomarkers could help clinicians like himself make treatment decisions.

“Right now in the clinic, we have only limited information to predict how a patient might respond to chemotherapy and no information to predict response to radiation or combined radiation and chemotherapy,” Wahl says. “A biomarker like the one we developed in this study might be able to tell us which patients should absolutely get combined therapy.

“Or help us pick between radiation or chemotherapy in patients who aren’t well enough to tolerate both.”

U-M has filed for a patent application related to this work.

This story was originally published by the Michigan Health Lab Blog on June 11, 2019.