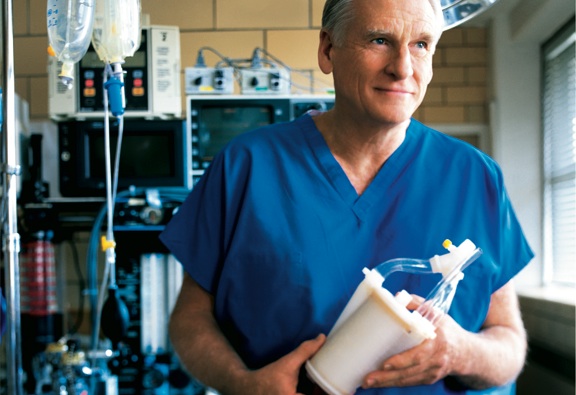 It was thought to be strange and risky in the 1970s, but research with sheep paved the way to a new machine that gave critically-ill patients with failing hearts and lungs a chance for their organs to rest and repair themselves. To date: 50,000 patients treated; more than 2,000 of them right here at U-M, and thousands of lives saved.

It was thought to be strange and risky in the 1970s, but research with sheep paved the way to a new machine that gave critically-ill patients with failing hearts and lungs a chance for their organs to rest and repair themselves. To date: 50,000 patients treated; more than 2,000 of them right here at U-M, and thousands of lives saved.

Some of what Dr. Robert Bartlett did was thought to be crazy. You were going to take an extremely sick baby, make an incision in the neck, tie off the largest blood vessels there, put tubes in both the artery and vein –and then attach this odd machine.

But to the Manguia-Bryan family—and thousands of others—Bartlett and his machine are life savers.

The technology is called extracorporeal membrane oxygenation—or ECMO for short. ECMO does the work of a critically ill patient’s failing heart and lungs for a period of days, weeks or even months—long enough for the organs to rest and recover, thus increasing the patient’s chance of survival. ECMO is similar to the heart-lung bypass machines used for a few hours during open-heart surgery, but made for longer-term use.

Victor was on ECMO for three weeks, and today the Manguia-Bryan family is enjoying life with Victor and his twin brother.

ECMO was made possible by Bartlett’s previous research with sheep, and he and his colleagues have continued to improve it by testing new ideas in animals.

When the work began, he says, “The heart-lung machine we used for cardiac surgery could support life, but only for a few hours. Our research determined the limitations and extended the use of mechanical life support to days, then weeks. This was research that required experiments in animals.”

Sheep are an excellent model for the study of major body systems that control blood circulation, breathing, waste processing, reproduction and hormone regulation.

The sheep’s body size allows good access for the insertion of physiological monitoring and sampling devices, and the animal recovers quickly and well from general anesthesia and invasive surgery.

Bartlett retired from clinical practice in 2005 but continues to run the large laboratory where ECMO was developed. Under his direction, the laboratory continues to perfect ECMO technology and is working on developing artificial organs. They’re also developing surfaces to replace the plastic tubing currently used to move blood around in the ECMO machine. Through this work, they hope to eliminate the need for patients on ECMO to take blood thinner drugs, which are tricky to administer correctly and remain one of the biggest drawbacks of the technology.

“That breakthrough,” says Bartlett, “is just a few short years away. We are very close.”

U-M TRAINS OTHERS IN ECMO / DESTINATION TECHNOLOGY AND CARE

Today, thousands of doctors and nurses from around the world come to the University of Michigan’s hospitals to receive training on the use of the ECMO machine, in order to bring this technology to their own hospitals.

U-M continues to be the destination for the most difficult cases – not only for U-M’s depth of knowledge in ECMO technology and care of patients, but for life-saving programs that work in conjunction with ECMO, such as Survival Flight, which flies the sickest patients from around the country on transportable ECMO technology, and the Fetal Diagnosis and Treatment Center, which identifies problems that can be treated from prior to birth and after, with the help of ECMO technology.

Watch a video about U-M's 2,000th ECMO patient on YouTube.

Learn about what the U-M Extracorporeal Life Support team is doing now for patients and families by visiting the U-M ECMO website.